TMI Tuesday – Would You Rather…?

It’s another addition of TMI Tuesday “Would You Rather…?” 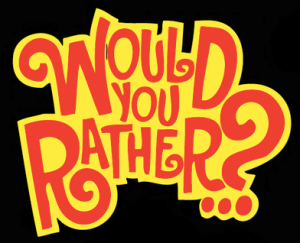 It depends. I really don’t like to share, and I don’t think he would either. However, if the other person he had sex with was male I might be more into it. I would feel more comfortable having sex with a woman than a man if my boyfriend was to watch. However, I would love a MMF thressome with him, so if he was to join I would much prefer that.

Guy on guy, as that is what I watch anyways.

5. Based on your current mood, would you rather try out new and kinky sex ideas or have romantic sex?

Honestly, I would love the romantic sex, as it has been a long time for any type of sex.

Bonus: Would you rather have three kids and no money or no kids with three million dollars?

No kids and 3M dollars, definitely. I am kind of thinking I don’t want kids, though I am just not at a good point in my life to even consider kids.

How to play TMI Tuesday: Copy the above TMI Tuesday questions to your webspace (i.e., a blog). Answer the questions there, then leave a comment below, on this blog post, so we’ll all know where to read your responses. Please don’t forget to link to tmituesdayblogfrom your website!

3 thoughts on “TMI Tuesday – Would You Rather…?”

This site uses Akismet to reduce spam. Learn how your comment data is processed.

This blog is intended for those 18 years of age and older. If you are not at 18 or older, please go somewhere else.